So.. CumbriaVAG team member Dan is tieing the knot in a couple of weeks, and nothing could top a trip to Wörthersee for his stag do. We’ve been going for a few years now but never in anything particularly special; this time we thought we’d go all out!

It had to be a Sharan, it absolutely had to. A few years ago we bought a Mk1 Sharan TDi, set to it that night with a few cheap mods under the bonnet, and the next day drove it to Austria, and it was so much fun. So we thought why not do it again, but better.

First of all came the wheels, Stef spotted the Brabus Monoblock II’s for sale on Facebook at the end of last summer & after a couple of Photoshops & fitment calcs we decided they were absolutely perfect and they’ve sat in the corner of the garage ever since. The actual choosing and buying of the car came much later & we probably left it as late as we could have done.

When we knew the clock was ticking with Wörthersee being only a month or so away, Dan and I met up one weekend to go check out (and hopefully buy) a Mk2 Sharan 1.8t. The original plan was to remap it, maybe with a few other toys, and we’d have a decent petrol motor that wasn’t too bad on fuel for the 3000 mile round trip. Unfortunately just as we were about to set off, a quick call to the dealer revealed the car had already sold. We took straight to eBay, Autotrader, and anything else we could think of to find a replacement; and at the same time we both stumbled across a tidy looking VR6 with only 59k on the clock! We had to buy it, it fit the bill perfectly.

We picked up the car the following morning & as soon as we got back it was up on the ramps getting a full once over, there was quite a list of bits that needed sorting but nothing too serious. Meanwhile Stef was on the case liaising with Only Charged Dubs & SycoGraphix about the chances of getting it bagged and wrapped in time for the trip. It was going to be tight but we knew we could just about pull it off, it had to go straight to OCD the following day so they could start measuring everything up, so we had to put all the repair work on hold until we had the car back.

A couple of weeks passed and we got the call off Matt at OCD to say the car was almost ready, but a delay with the management at customs meant we weren’t getting it back as soon as we’d hoped. With a list of jobs to do, and a big box full of parts that needed throwing at it, we were starting to panic to say the least. We had to scrap the original plan of taking the car straight down to Syco, and instead we whipped it back from Doncaster to Cumbria to get it fixed up.

Stef and I set off for Doncaster Monday morning, and got there mid afternoon just as Matt was finishing off the final touches to the install. He brought us into the workshop and dropped it to the floor, we were absolutely stoked! You don’t see many of these around anymore and we definitely hadn’t seen one on it’s ass like this. 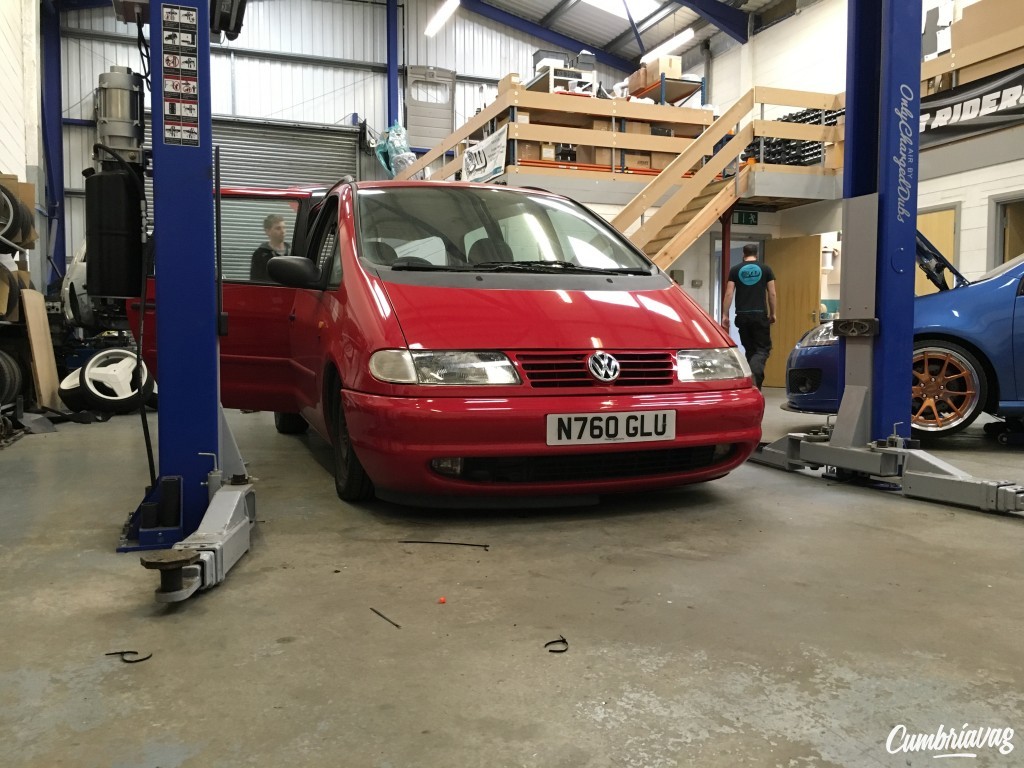 We set off straight back & gave everyone the heads up to meet us back at Dan’s unit, we had a LOT of work to do that night.

We got back to the unit at around 6:30 and Dan, Phil, Joe and Liam were all waiting with tools & parts all ready to go! Charlotte was also en route with a new radiator plus plenty of pizza & beer to keep us going, it was going to be a late one. 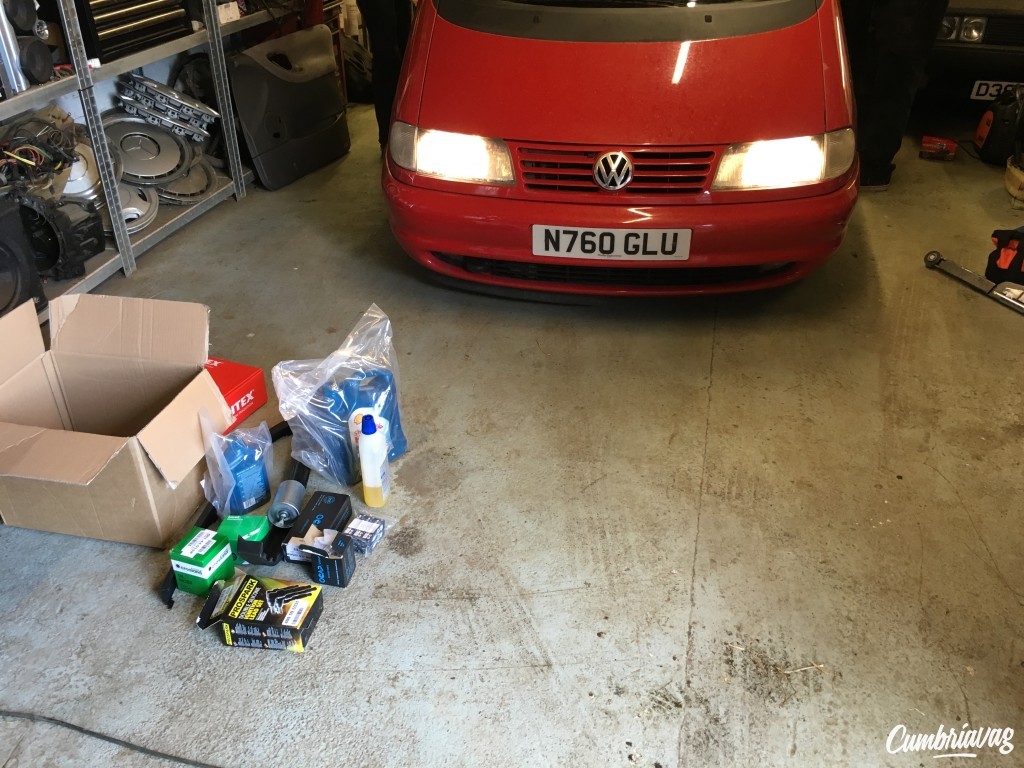 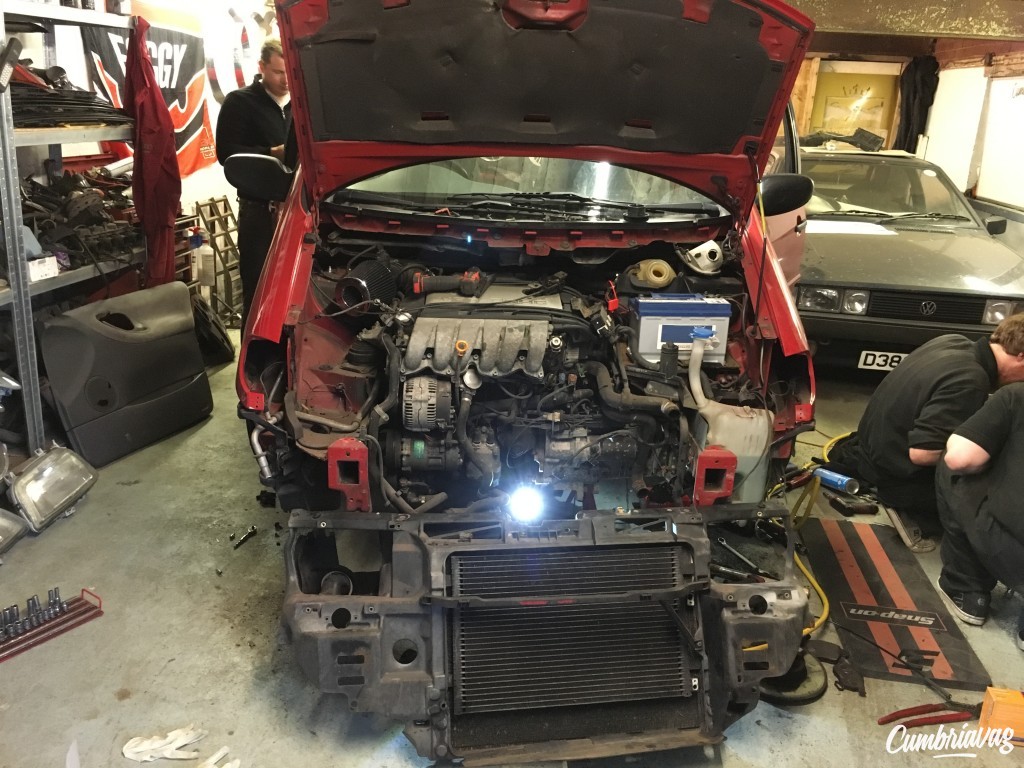 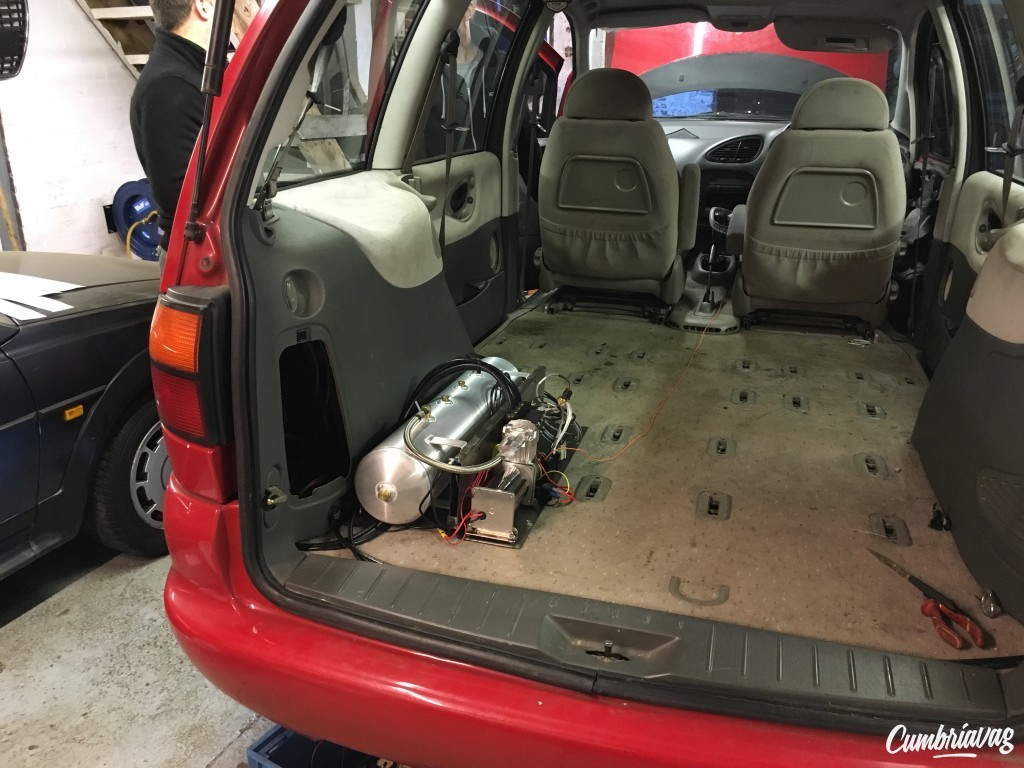 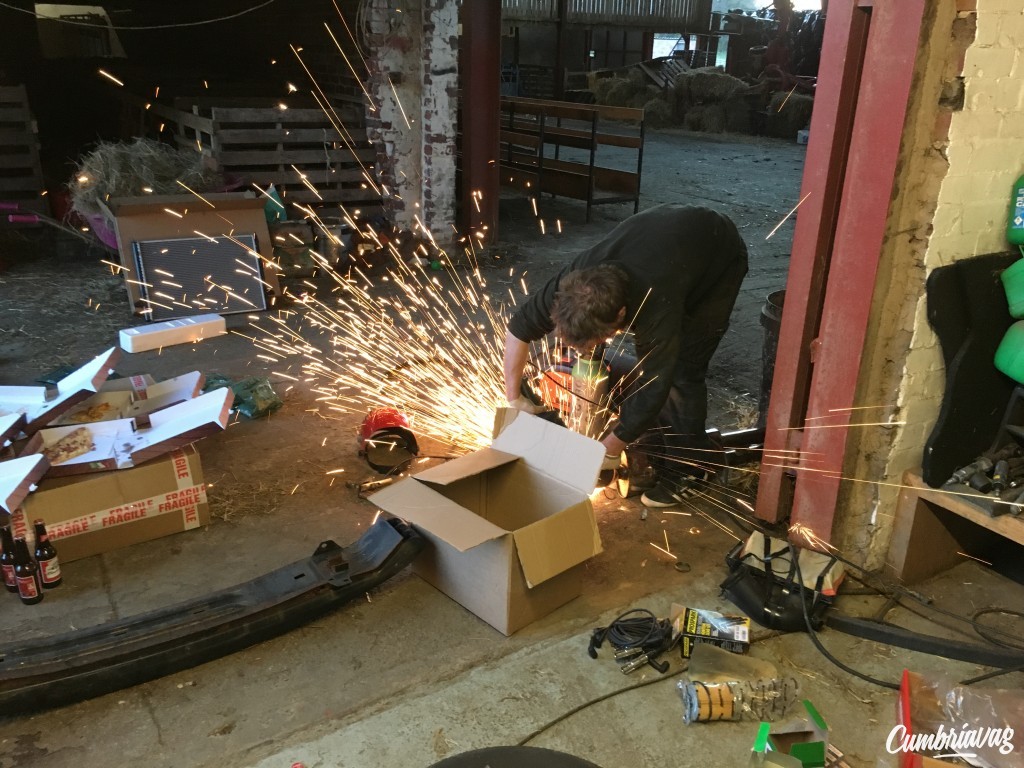 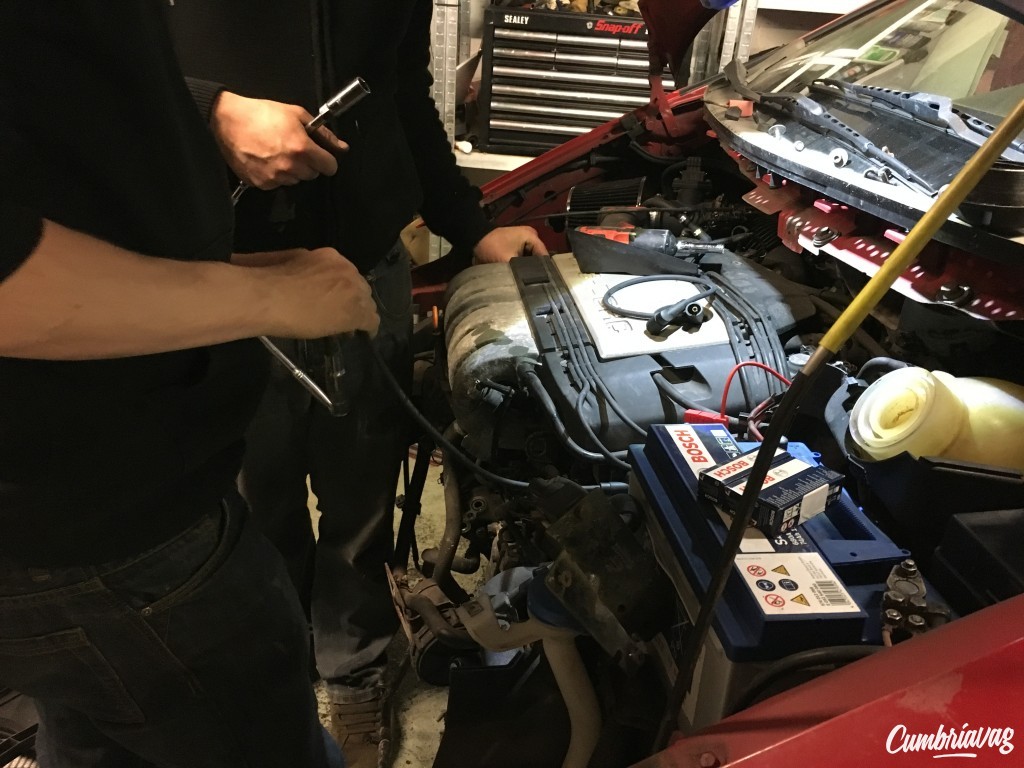 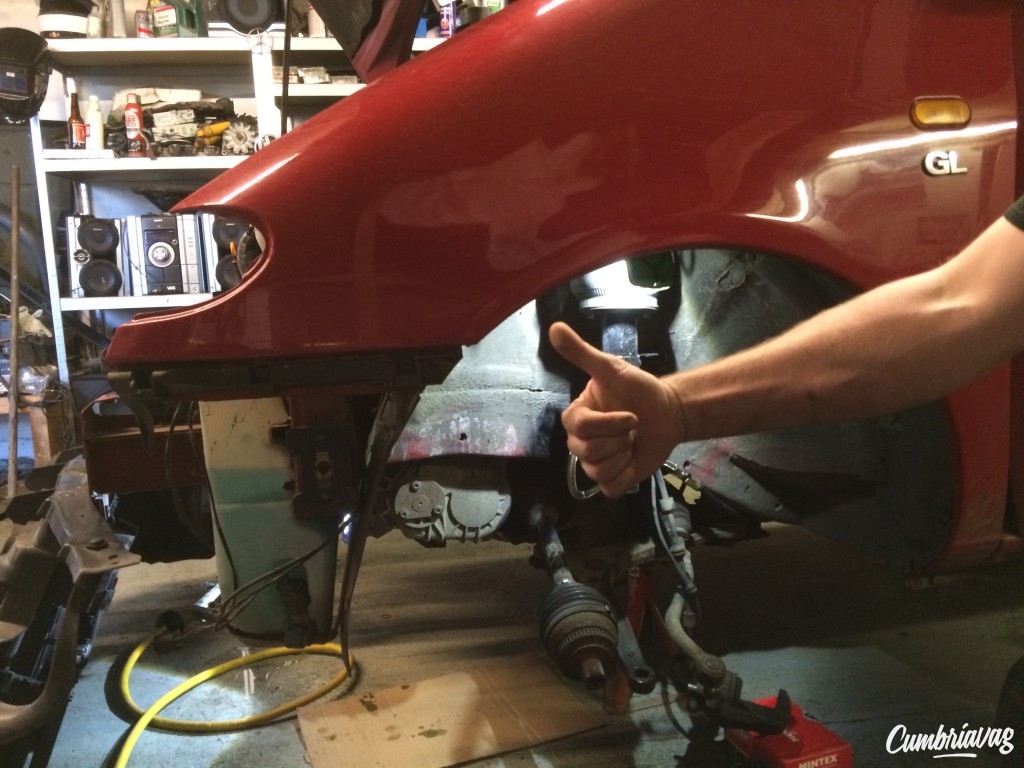 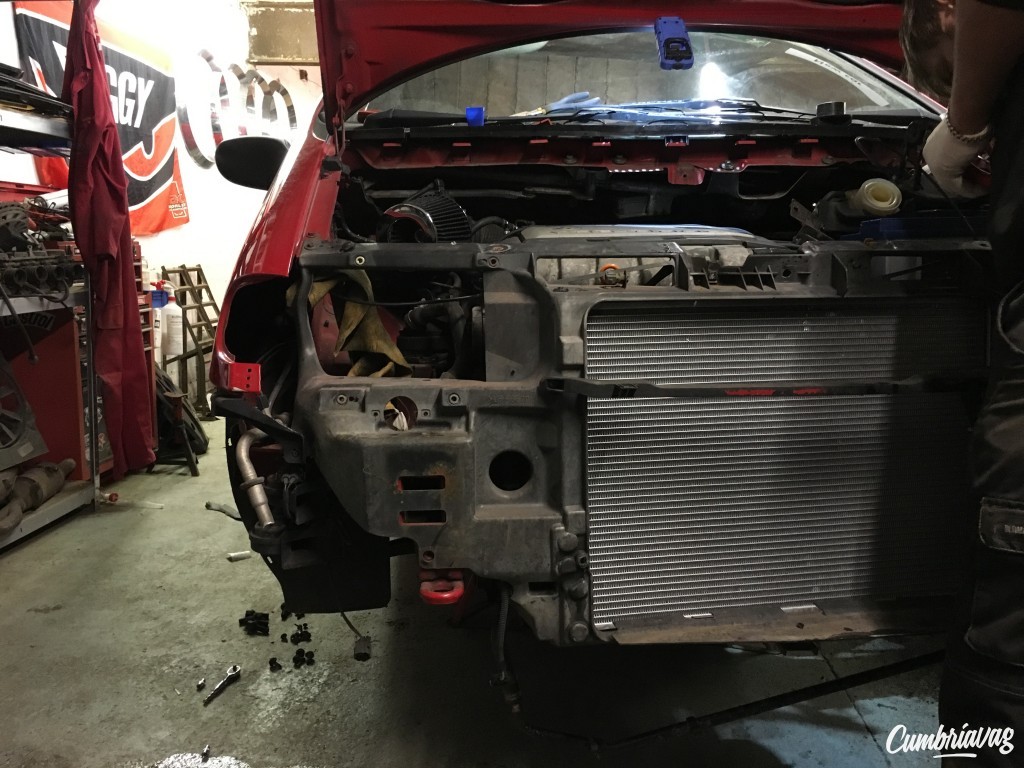 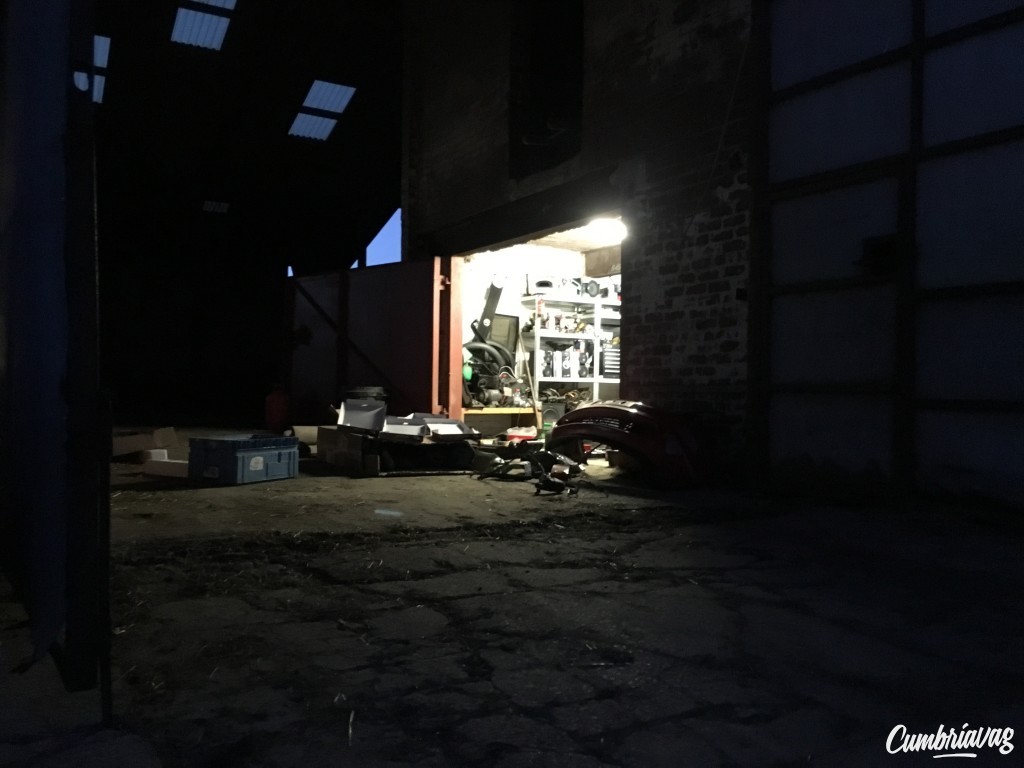 We set about ripping the car to bits to get to everything we needed, the front end needed to come off because the radiator was shot, along with the wheels, exhaust, and other bits. We replaced a wheel bearing, ball joints, plugs, leads, oil, filters, the list goes on… you get the idea! By around midnight it was all back together and sat on the Monoblocks and after a quick blast through the tunnel down the road we knew it was all good to go. 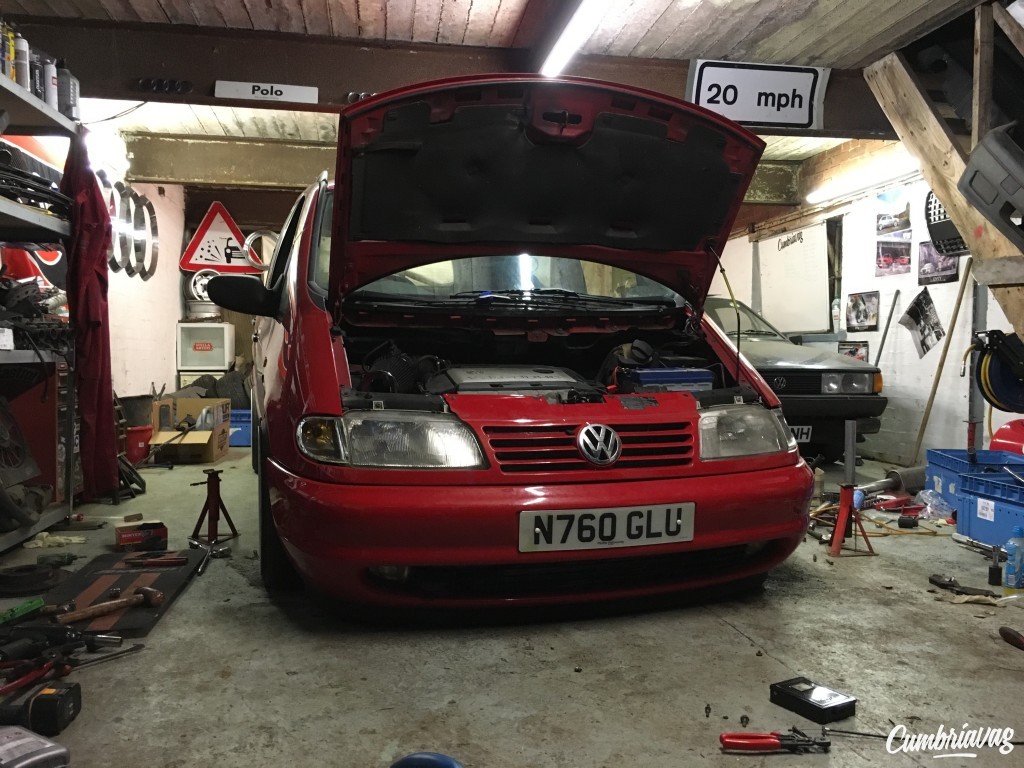 The next morning Stef & I were up again at 6am to set off for Syco’s down near Birmingham. We got it there mid morning and while Si set about prepping the artwork we did the last few bits we needed to before leaving him to work his magic. We left him with a design showing what we wanted – but with only a couple of days to go we knew it was going to be a huge push and accepted that, at this stage, whatever he could get done was going to be a bonus. 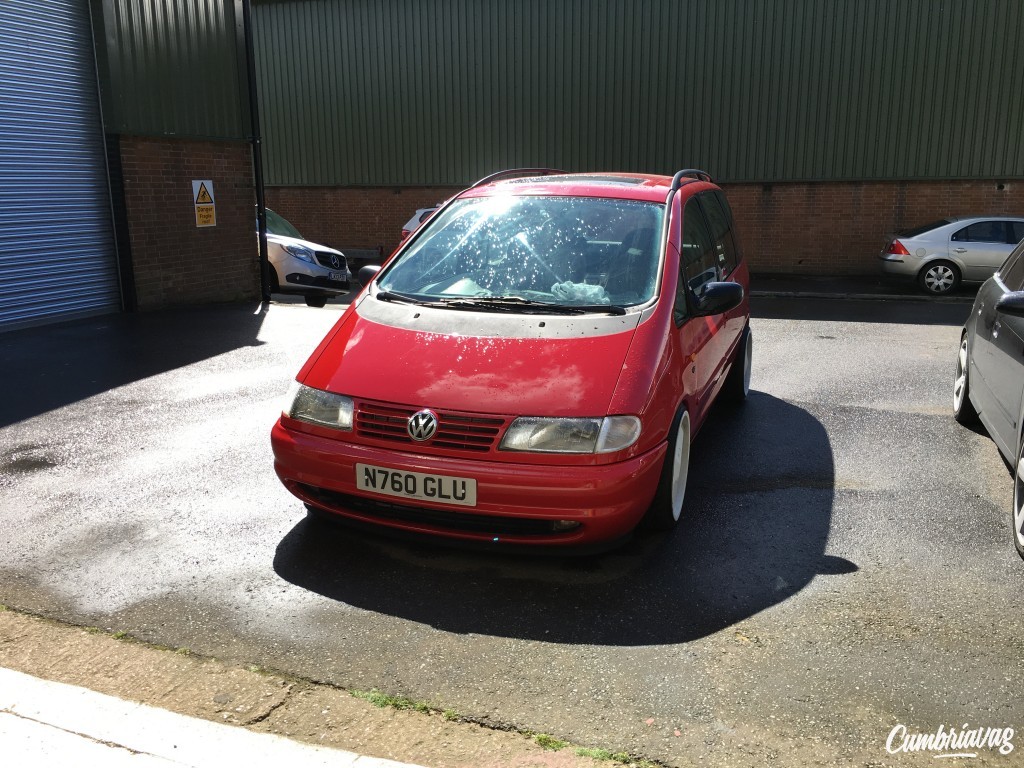 Thursday came around and it was time to set off, Si was still working on the wrap so we picked up a hire car to get down to Birmingham in, with the intention of jumping in the Sharan and dropping it off down there. We landed up at Syco’s late that evening, all looking forward to seeing the finished product, but not sure what to expect with Si having such a tight deadline. The shutters came up and there it was, even better than we’d imagined. It was absolutely perfect, and there was Si stood behind with a cheeky grin on his face! He’d absolutely nailed it. 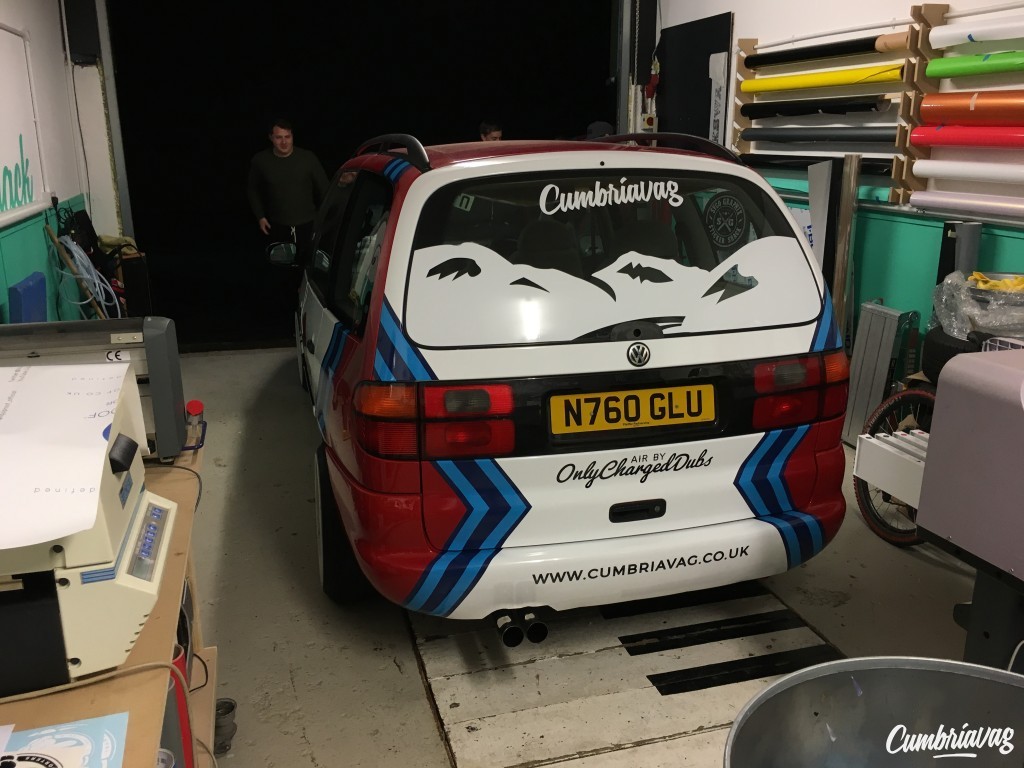 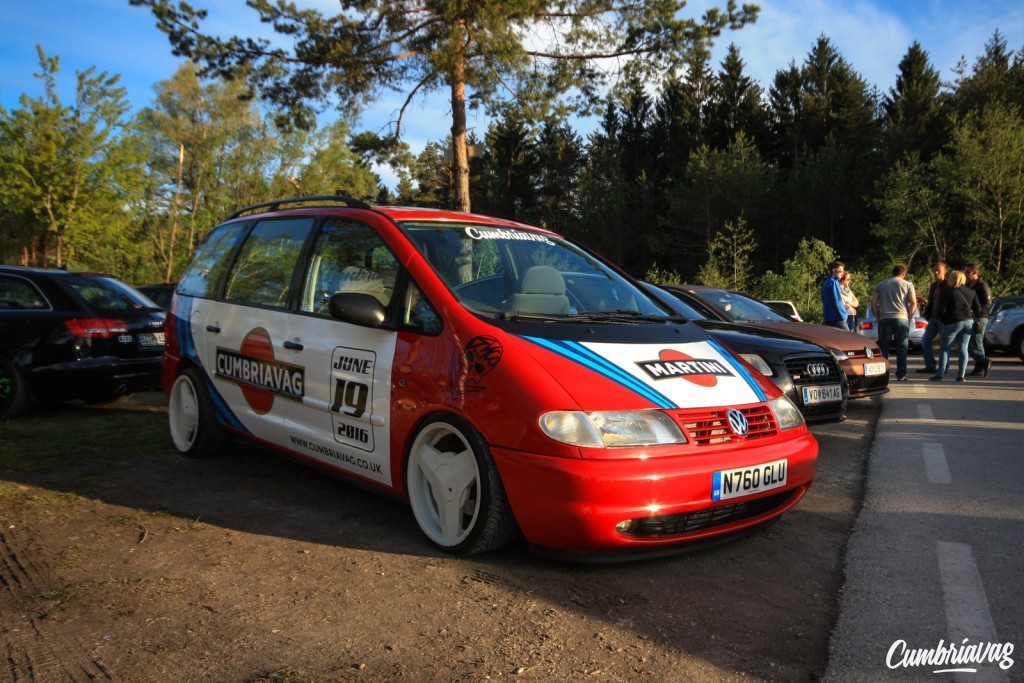 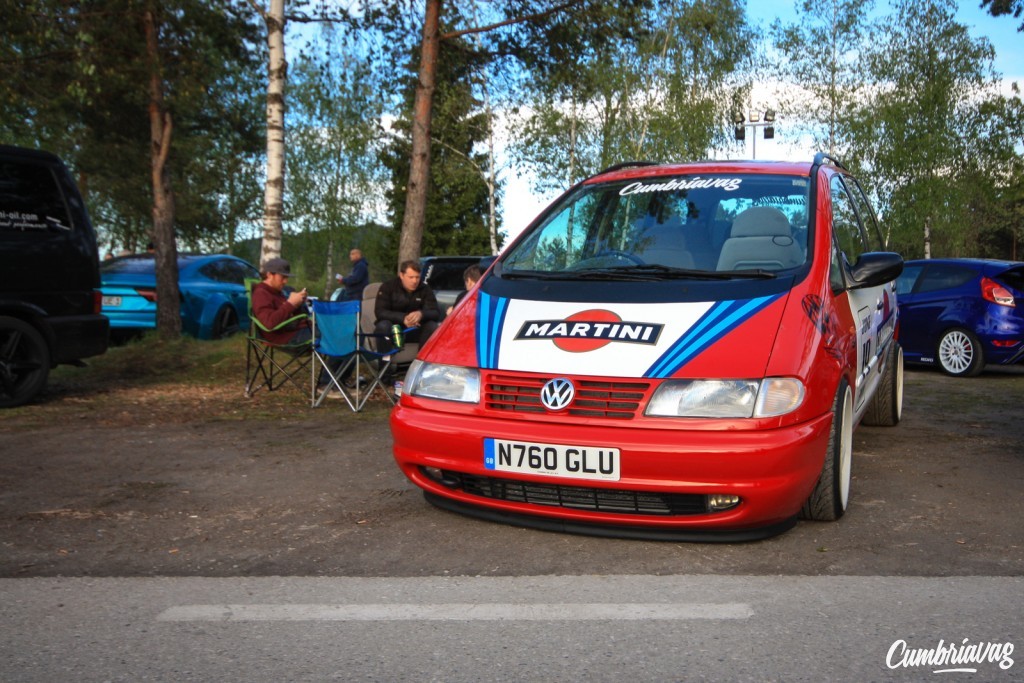 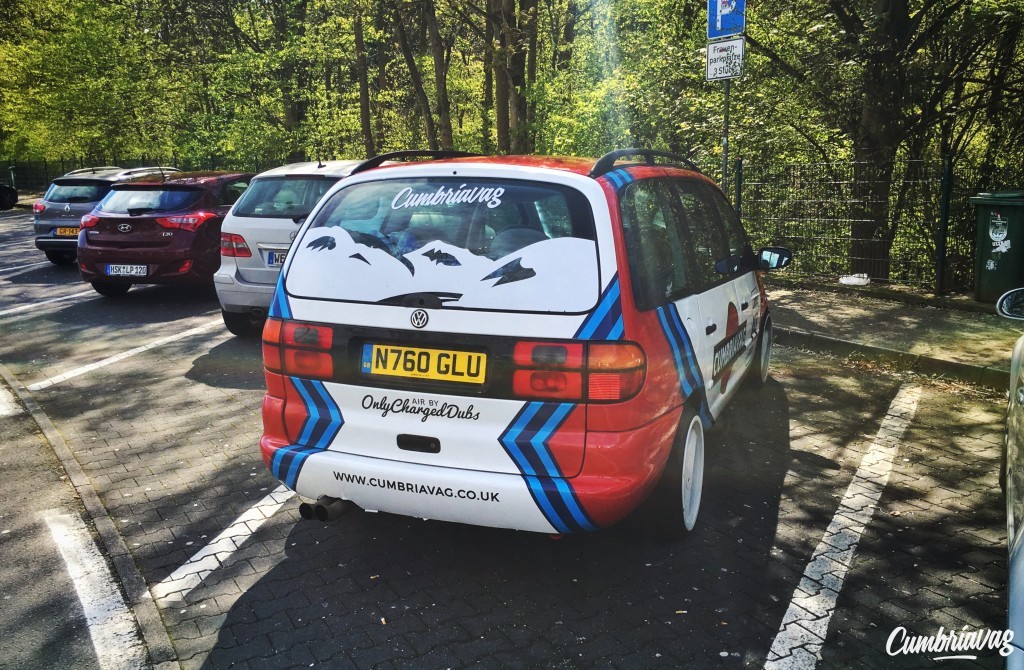 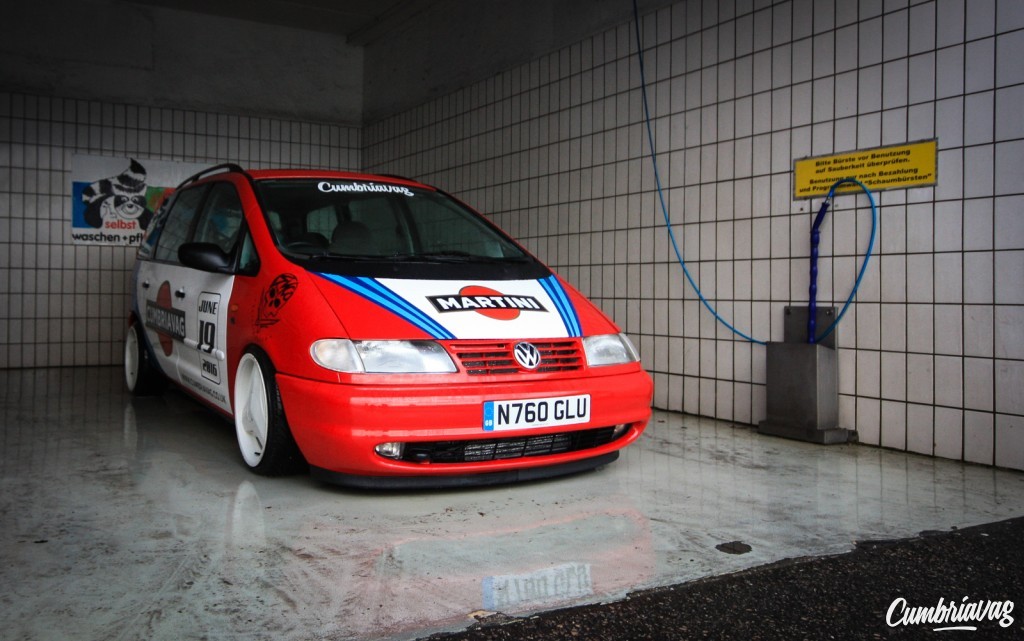 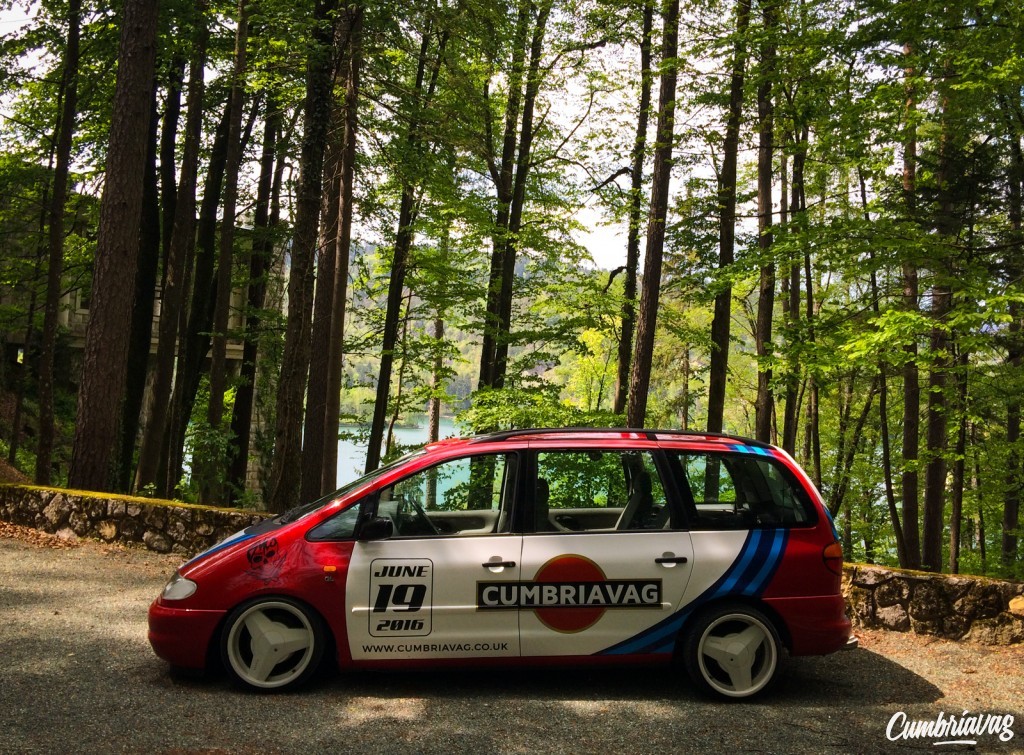 Standard, disgusting, Ford Galaxy dash, seats and carpet that never should have been allowed inside a VW shell.

A massive thanks needs to go to Phil Jones, Liam Nye & Joe Edgell for all their help, and obviously to Matt at Only Charged Dubs and Si at SycoGraphix for pulling through for us with such tight turnarounds, we look forward to having both of them at this years festival in June.